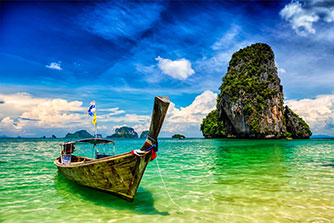 A brief History of Thailand

Thailand has been inhabited by people for the last 20,000 year, since the palaeolithic era. Inhabitation from more modern humans has been traced back to 4000 B.C.E. where evidence of rice cultivation has been discovered, into the 3rd millennia B.C.E. where bronze tools have been discovered. Thailand has a long and interesting history, if you are a student travelling to Thailand, you may wish to view our student travel insurance page. refer to the page for more information about travel insurance for students.

The Khmer people inhabited much of South-East Asia in the 9th century B.C. building parts of their empire in countries like Thailand, Cambodia and Laos. Around the 2nd century B.C.E. the people of the region would start trading more and more with merchants from India, who brought with them Hinduism, which would have an effect on the area. From the period 100 – 1000 A.C.E. trading increased between all areas of South-East Asia, and with South Asia and East Asia. With the crossing of borders and boundaries by merchants came the exchange of culture, ideas and goods. Spirituality and religions from India could now be found throughout South-East Asia. In particular, the Buddhist tradition had managed to spread from India/Nepal into China, and into Thailand. There are many temples throughout Thailand build in the classical Thai archaeological style. You may wish to photograph some of the gorgeous buildings in Thailand, if you do take a camera with you, check our luggage and individual item limit page for information about travel insurance for your luggage.

Not a lot is known about Thailand prior the 13th century, as much of the evidence of its history comes from archaeological finds, rather than written and recorded history. After the first millennium, Thai history and culture were better documented. Buddhism entered into the country from India, and from other Indianized cultures, such as the Khmer. For example, the Dvaravati culture existed around 700 A.C.E. and was heavily influenced by Buddhism and Indian culture. The Indian traders affected much of South East Asia, and with Indian traders came Trade from West-Asia and Europe. Coins from Rome dated from 230 A.C.E. have been found at U Thong, one of the primary Dvaravati cities. Thailand is a wonderful country to visit for its rich culture, if you’re planning on travelling to Thailand and need travel insurance, check our travel insurance online page.

The Thai people entered into the land around 700 A.C.E. and started to establish themselves there in what is now modern-day Vietnam. The Thai people are said to have originated from Guangxi in China. Guangxi today is actually located on the border with Vietnam, close to Thailand. It was during the second millennium, in the 1200s, that the Thai city-states started to separate themselves from a dwindling Khmer power. It was out of this weakened regime that the Sukhothai Kingdom emerged, who had a special way of ruling. Their method of rule was the ‘father governs children’ way, where the people would come to the king and voice their problems, they even had a special bell at the palace which people could ring to seek counsel. Similar in many ways to having good travel insurance to Thailand, if you need help please contact us.

Always make sure you compare travel insurance policies and make sure that they have a toll-free 24/7 hotline so you can contact your insurer from anywhere around the world; see our overseas travel insurance guide for more information.

Leading up to the 17th century, Thai history is dominated by what’s known as the Ayutthaya period. The Ayutthaya people lived on an easily defensible island, and so their power flourished throughout Thailand. To speak to the strong Indian influence throughout Thailand, the word Ayutthaya is actually derived from the Indian language. Languages are actually one of the biggest barriers when we travel overseas, and you may not see it, but it is one of the reasons to purchase travel insurance. If you’re not sure about whether or not you need travel insurance for your trip to Thailand, see we do I need travel insurance page.

Ayutthaya was also known as Siam and is the more common name. Ayutthaya was generous towards traders from all around the world, including Europe, and allowed them to establish camps at the city’s boundary. This amiability with global merchants turns Thailand into a hotspot for foreign traders and particularly attracted the attention of the Portuguese. Who are the modern traders of the world? They’re the business people of course. If you’re heading to Thailand on business and you’re in need of travel insurance, read our business travel insurance page for a guide on the right policies. Of course, the period of trade with the Portuguese led to unprecedented economic growth, and Ayutthaya was known as the largest city in the world during the 1700s.

The 1900s were characterized by the end of absolute monarchic rule in Thailand, and the signing of the Permanent Constitution of Siam ensured a change of rule in Thailand. A prime minister was instated, and Thailand became a constitutional monarchy. During the 1930s and ’40s, fascists tried to change the regime in Thailand. Enemy number one was ethnic diversity in Thailand, and the movement was characterized by pan-nationalism i.e. only buying Thai products, respect for the national anthem etc. Thailand would attack the French presence within South-East Asia in what would become the Franco-Prussian war. Soon Japan would invade Thailand, and they’d sign a peace treaty, with Thailand and Japan eventually forging a military alliance. After WW2 the allies would occupy Thailand, with the Gurkhas imprisoning many of the Japanese occupants of Bangkok. If all of this history talk is making you keen to travel, then don’t hold back, especially if you’re young, now is the time to head overseas, see our backpacker travel insurance page for more details.

Thailand’s very close to Australia, and is cheap, so if you’re planning on heading to Thailand multiple times throughout the year for a holiday, you should look into getting an annual multi-trip travel insurance policy.

Back to Thailand Travel Insurance homepage.